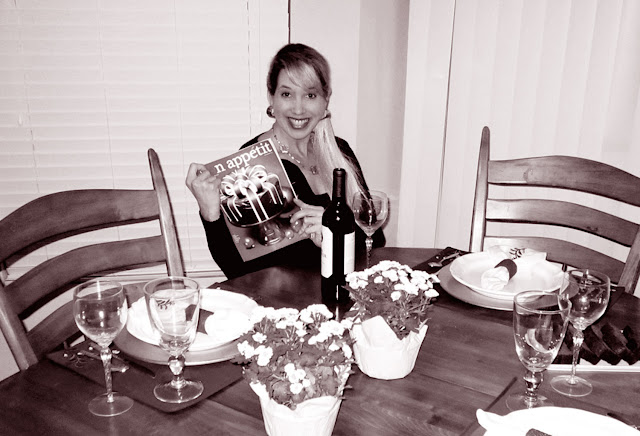 "Your Italian Sausage, Spinach and Parmesan Stuffing was so moist...
~That Crown Roast was juicy and that Garlic, Balsamic Sauce was perfect!...
~The Mustard, Thyme Roasted Potatoes melted in my mouth...
~And that Cranberry Orange Cheesecake- to die for."

Been there.  Done that.


This whole holiday thing was feeling a bit dreary and dried up.
And I was craving some outside-the-box recipe creations!

Mom & Dad came early this year and, well, Mom is my foodie hero.  She taught me to cook starting at about 2 years old, and it's been my passion ever since.  She was the first one on our block to buy a pasta roller, garlic press, and she introduced me to roasting!  And some of the BEST restaurants and gourmet food stores in Santa Barbara (and beyond), not to mention inspired my love for B&B's and holiday cooking.

And I still love cooking with her. 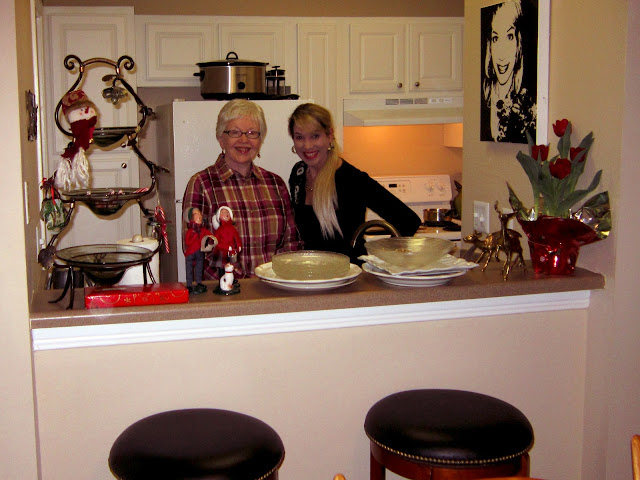 And we've all shared some amazing meals together, especially Christmas. 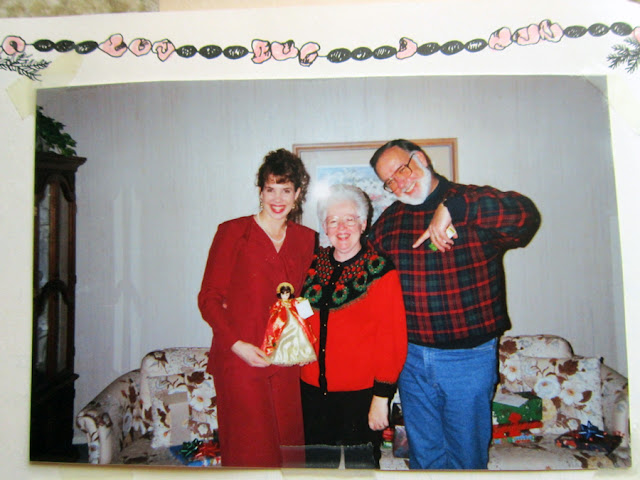 1994. And yes, we are like fine wine and cheese... you get the drift!
(Love the yellowing tape on the photo in this album- and my Flash Dance, ponytail brown hair) 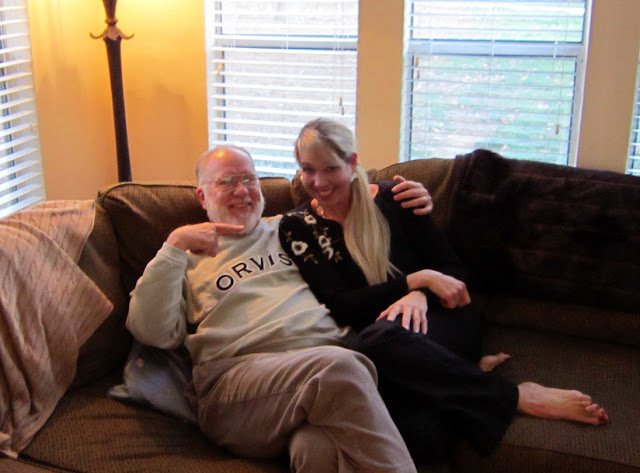 And today, Pop is still proud of his girls, even his all-grown-up one.  My Pop is the best.

Feeling bold, I grabbed the last 10+ years of my Bon Appetit holiday issues and put them in a pile.  I covered my eyes and promised myself no matter how it all turned out, I'd have to create a holiday meal from the issue picked blindly... only new recipes, and I'd have to do them as close as possible BY THE BOOK. 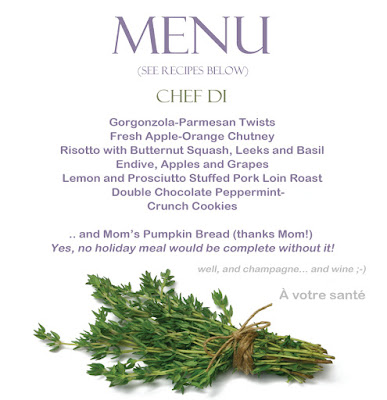 “The dinner was innovative, delicious and I’ll let you know if it is a success if I’m still alive tomorrow,” said my mother (after spending most of the day stirring the risotto).
And so it began...

I got up early and shopped three stores to get the best deals (total came in at just $77!) 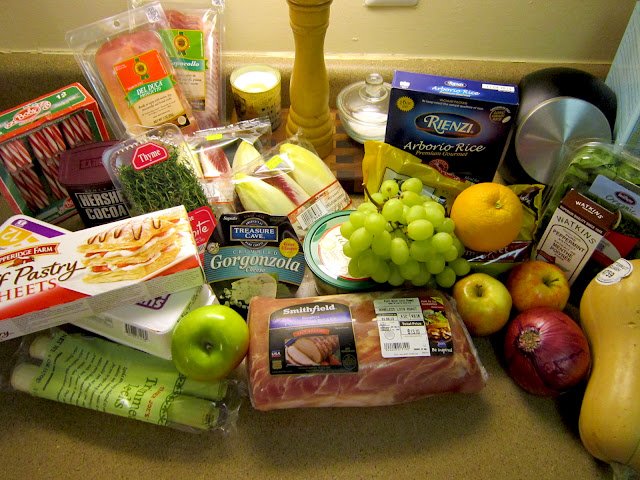 The Twists and Chutney perfectly complemented our Pink Champagne. Then we moved it to the dining room.  I decided to simplify this year and LOVED the white flowers that perked up the table.  And the pretty floral pattern embroidered on the napkins and placemats added even more smiles to the occasion. 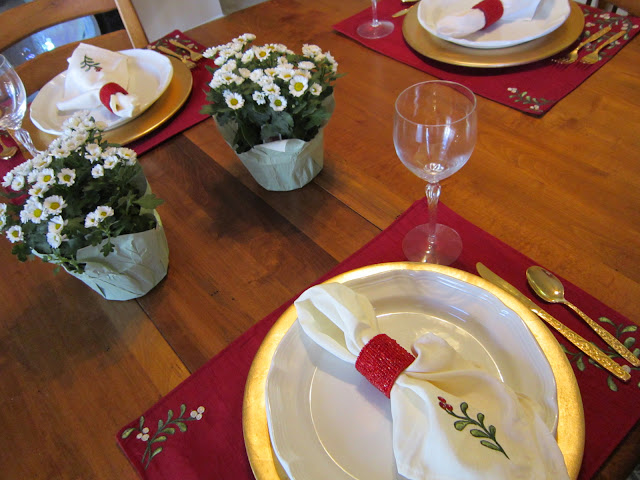 The risotto just about killed us... man, it's true what they say! 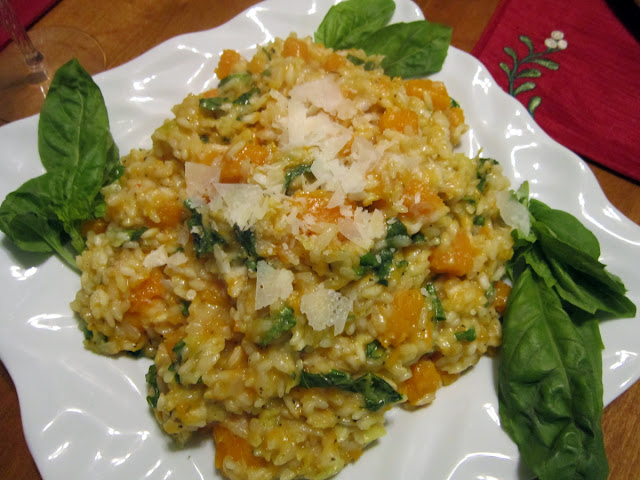 But it was sooo tasty!  And the Apple, Endive and Grapes added a beautiful fruity compliment to the risotto and the pork.  So rustic and French-feeling.  It reminded Mom and I of our trip to Paris. 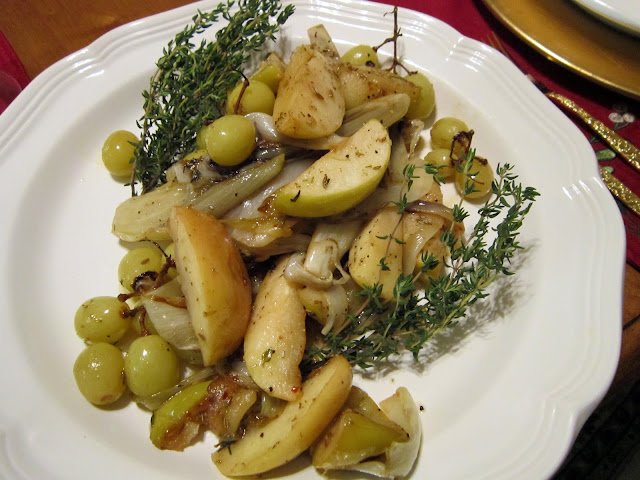 And don't forget the main attraction- the pork, stuffed with some of my favorite flavors- prosciutto and lemon.  What a showstopper. 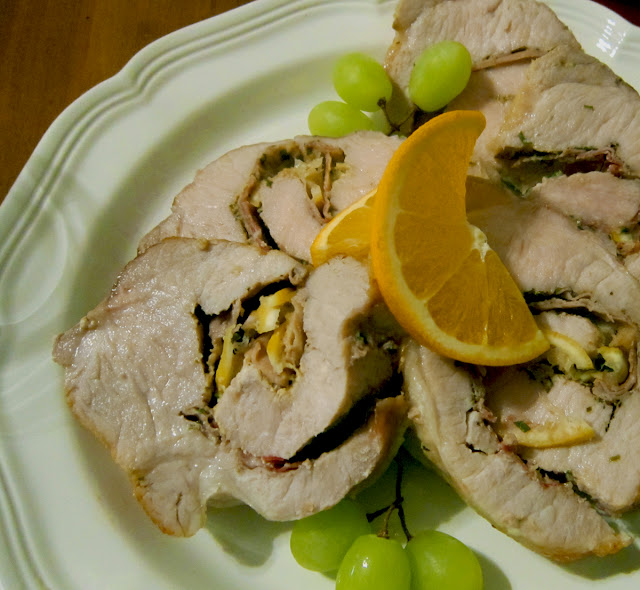 Finally, dessert.  I love dessert, but I knew this meal was rich.  So, I decided ahead of time that instead of some elaborate dessert, I'd make us some beautiful, yet simple Christmas Cookies... 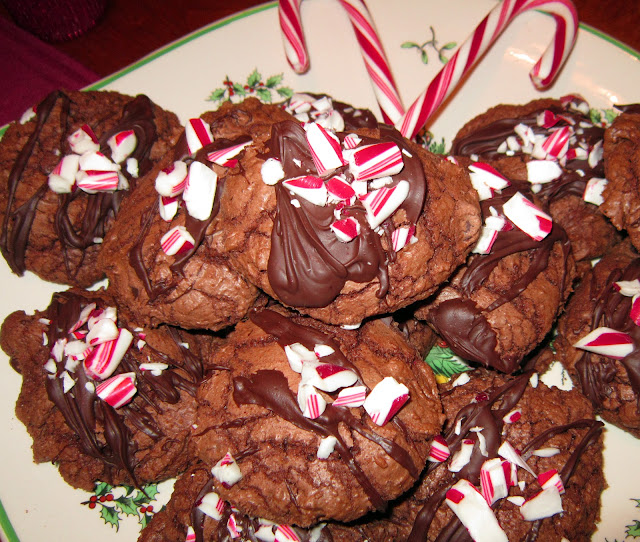 We ate.  We licked the plate.  And yes, we were all asked to rate.

Gorgonzola-Parmesan Twists: ★★★★★
(Perfect appetizer with LOADS of flavor. I added a sprinkle of dried basil and oregano and cut the twists in half to make shorter bite-sized yummies!  I also used capocollo instead of prosciutto, since they only had one package of prosciutto at Wal Mart and I needed it for the roast ;-)

Fresh Orange-Apple Chutney: ★★★★★
(This was SO fantastic!  I can see using this on multiple things from a spicy shrimp quesadillas topping, or on grilled chicken, scallops or even salmon.  Or simply with some crusty french bread and brie.  I left out the garam masala, used honey and 1/4 tsp. ground ginger instead of fresh.  I also substituted about 6 drops of tabasco for the jalapeno.)

Risotto with Butternut Squash, Leeks and Basil ★★★★1/2
(We gave this 4-1/2 stars simply because it was SOOO much work...still hoping Mom will live to see the light of day)  But the flavors were fabulous, and the concept, with the leeks- brilliant!  Next time, I'd roast some sweet potatoes and add at the end instead of the butternut squash, and perhaps use quick-cooking rice. Otherwise- thumbs up from us.  And the leftovers?  Tonight I'm making risotto cakes. Roll the formed patties in breadcrumbs and fry in a skillet with melted olive oil and butter until golden.

Endive, Apples and Grapes: ★★★★1/2
This IS an unusually, delicious recipe, and was an incredible contrast to both the pork and the risotto... but I DON'T LIKE ENDIVE.  There... I said it.  I even added a bit of honey to it all, and it just tasted bitter to me.  So, here is my idea.  Take the apple wedges, grape clusters and a head or two (yum) of fennel sliced in thin half-moons (ditch the endive) and saute in butter with herbs until nicely browned.  Then transfer to the oven and roast at 400 for about 20 minutes until very nicely caramelized.  PERFECTION... and pretty!

Lemon and Prosciutto Stuffed Pork Loin Roast: ★★★★★
Ok, so I'm giving this 5 stars due to innovation, flavor and simplicity.  But, next time I think I'll use a pork tenderloin, cut almost through the middle and stuffed with the lemon (sliced super thin), then double the prosciutto and add panko (dried breadcrumbs worked fine, as I had a ton) and maybe even some spinach (or creamed spinach like Mom recommend- yum!)  The Pork Loin was a bit large to work with, and hard to roll and cut into small enough slices (hence the tenderloin suggestion). But these flavors were phenomenal and would also be amazing with chicken, or even in a thick-cut pork chop as stuffing.

Double Chocolate Peppermint Crunch Cookies: ★★★★★
As pretty as a present.  That pretty much sums them up... not to mention festive, chocolaty, mildly pepperminty and totally yummy!  Just make sure and don't overbake as they harden up quickly... plus, maybe crush the candy canes a bit more, as no one wants to break a tooth during Christmas Dinner~!

So.. the final verdict?  Success.  Well, at least pop said so.
And father knows best!

(until next year Mom & Pop. Thanks for being up to the challenge!)