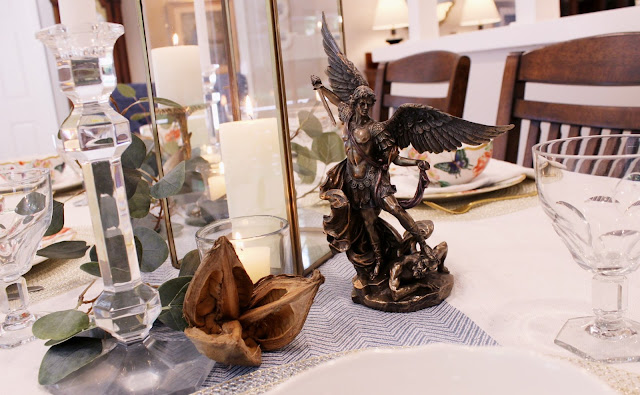 This year marks our first Michaelmas Feast, and it won't be our last! What better way to honor the Archangels—St. Raphael, St. Gabriel and especially St. Michael, while also celebrating the start of Autumn.
Every year about this time I pull out my cookbooks, dust off my good dishes from the china cabinet and start to make lists for the upcoming holiday season of cooking. But, each year I also get a bit sad because the first real holiday that we typically celebrate from this point on isn't until Thanksgiving,, and that's two whole months away.
So, I searched for a new tradition. Perhaps a beginning of Autumn tea? Or maybe even a feast day that follows the liturgical calendar? I came across Michaelmas which falls on the 29th of September each year and it sounded perfect as my husband's confirmation Saint back in Catholic School as a child, was St. Michael the Archangel.
Michaelmas is the celebration of St. Michael fighting against Satan and the fallen angels and thrusting them out of heaven to earth (see Revelation 12:7-9). The feast traditionally includes duck (which I couldn't find, nor was I sure that I wanted to) and the flavors of Autumn including pumpkin, carrots and blackberries (which you'll see below). 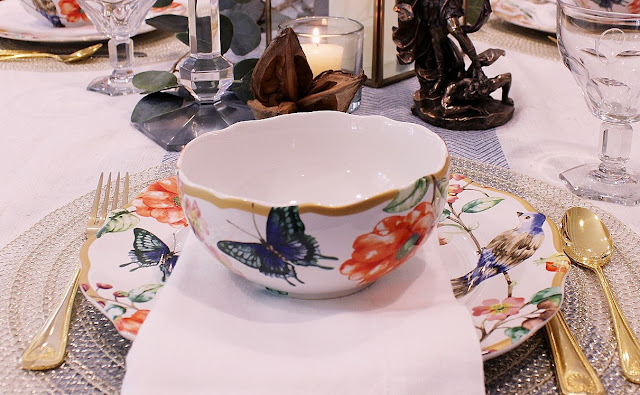 Our Michaelmas Table Setting
It's been a while since I've set a formal table so I decided to use these cheerful dishes from Horchow and create a centerpiece using a lantern and various sizes of candles and candle holders. Because of the colorful dishes, I decided to keep the rest pretty simple with white napkins, gold silverware and crystal water goblets that have been passed down to me from my mom and dad's wedding.
I also added some natural elements with some dried pods from Bloomist. I have come to love Bloomist for all their dried and faux flowers and vases (which I'll showcase in future blog posts). And I would have loved to use some wooden charger plates from Pottery Barn, but I had to settle on some round gold placemats (that I found last minute at TJ Maxx) since the order didn't arrive in time. 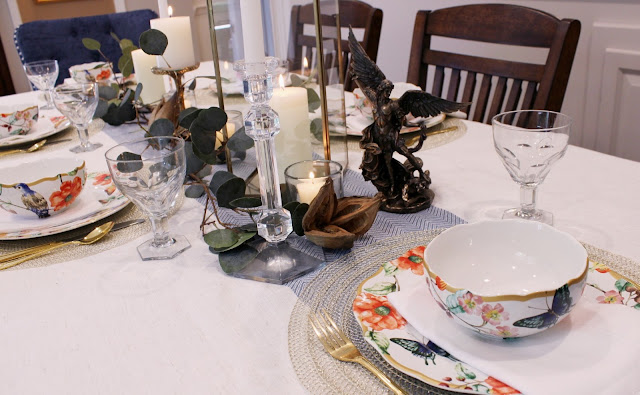 I was very pleased with the tablecloth that I purchased from Amazon, which felt and looked like something I could have easily found (and paid more for) at a higher-end store. The sewn-in runner down the middle added just enough pop to frame the centerpiece decor and bring in some blues to match, because, just about everything in our home is based on blues. 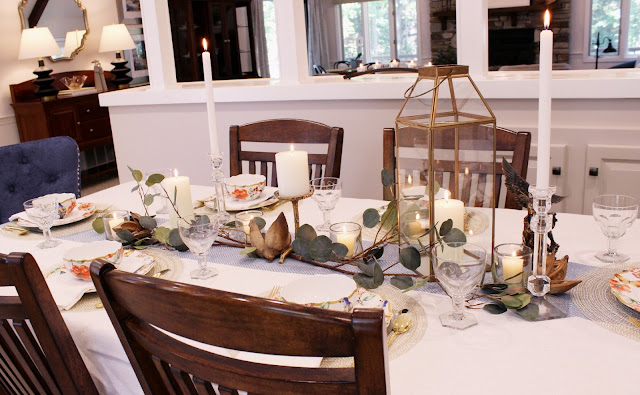 Our Michaelmas Menu
I affectionately called the main dish Archangel Pasta because the tortellini looks like angel wings. This is one of my favorite recipe creations (which can be found here) with the addition of some leftover peas I had from the salad. While there are many components to it, the flavor is incredible and it makes plenty of leftovers, so it's worth the extra effort.
Just make sure to use the leeks (which I simply cut up and sauteed in oil rather than braising them) because leeks add such a lovely flavor and can easily be found in your regular grocery store. 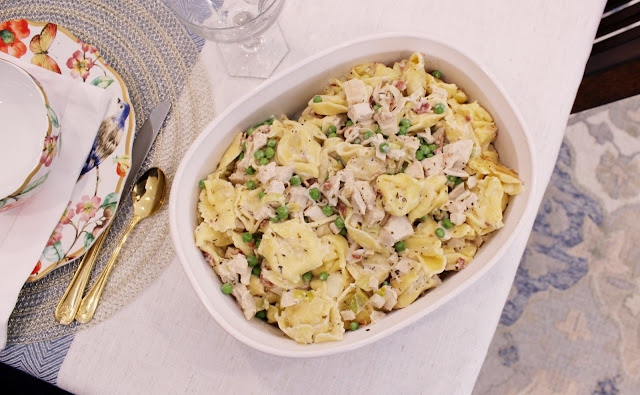 Next, I made a salad consisting of romaine lettuce, spinach, cubed mozzarella cheese, sliced shallots, pumpkin seeds, peas, carrots and Brianna's Blush Wine Vinaigrette. I typically make my own dressing, however, this one is a favorite of my husband and it offered a nice sweetness to balance out the spiciness of the pasta. 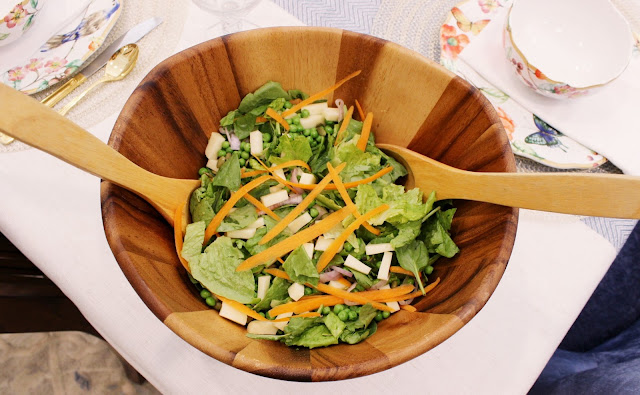 This simple side dish of Whiskey Glazed Carrots by The Pioneer Woman was quick to make, colorful, cost-effective and tasty. Carrots are a traditional side dish for Michaelmas and I was glad that I gave this one a try. 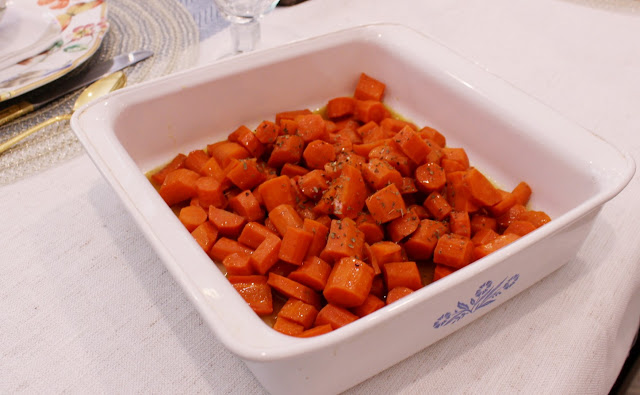 And I couldn't make an Autumn Feast without making Pumpkin Muffins (the easier version of my also well-loved Pumpkin Bread). My mom and I had been making these Pumpkin Muffins since I was a kid and they bake up so quickly since they use a baking mix (see the recipe at the bottom of this post). 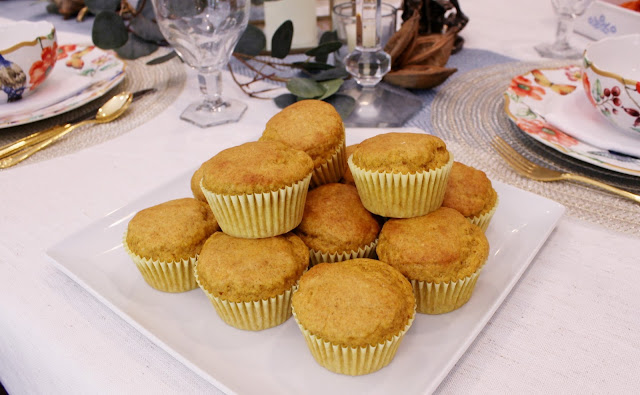 And finally came dessert. I opted for another Pioneer Woman recipe since my sister-in-law had made this Blackberry Cobbler before and loved it. Legend has it that when St. Michael threw Satan from Heaven, he landed on blackberry bushes and tainted them. So, one should never pick or eat blackberries after September 29th each year.
This recipe combined quickly (thanks to the use of melted butter and frozen blackberries) and was delicious with or without whipped cream. I ended up putting the full 1-1/4 cups of sugar in the batter (plus more on top) by accident (instead of the called for 1 cup) and I think it was even more delicious. Next time I'll use a larger baking dish, instead of a pie pan, as it was dangerously close to overflowing in the oven while it set and the edges got a bit too done for my liking. 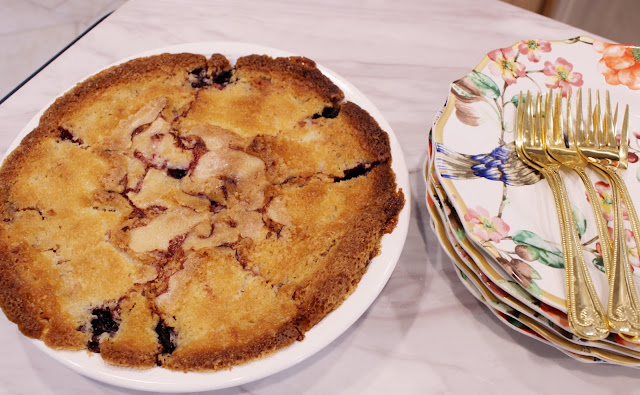 Michaelmas Pumpkin Muffins
2 cups Bisquick baking mix
1/2 cup sugar
1/2 teaspoon pumpkin pie spice
1/2 cup milk
1/2 cup canned pumpkin
1 slightly beaten egg
2 tablespoons vegetable oil
Preheat oven to 400 degrees.
In a large mixing bowl combine the Bisquick, sugar and pumpkin pie spice. Set aside. In a medium bowl beat together the milk, canned pumpkin, egg and oil. Add the wet mixture to the dry mixture and combine until smooth. Spoon into 12 paper-lined muffin cups and bake for 20 minutes at 400 degrees or a bit sooner in my case, as they tested clean with a toothpick.
Makes 12 muffins.
Michaelmas Prayer
from the Anglican Book of Common Prayer
Everlasting God, you have ordained and constituted in a wonderful order the ministries of angels and mortals. Mercifully grant that, as your holy angels always serve and worship you in heaven, so by your appointment they may help and defend us here on earth; through Jesus Christ our Lord, who lives and reigns with you and the Holy Spirit one God, for ever and ever. Amen.