I’m an introvert (it's true!) but I've never been afraid of just going for it, especially in my early years.
I met my horse two weeks before and we seemed to get on well enough. I’d fed him, cleaned his hooves, and learned proper saddling. But that day- the last day of horse camp, I flew. It was pure canter with him.

Sitting on his back trotting around the ring, while all the parents waited anxiously in the stands for the final equestrian vaulting demonstration, I froze. I couldn't breathe. But I focused on the sound of his hooves hitting the dirt in perfect synchronicity, while he circled on a long lead around and around.


I'm not sure how I made it up that day. Me, standing on his back, arms stretched out to the side- flying. My horse, that day, ran in circles for what seemed like forever... while time stood still.


At 12, we were naive. We were wannabe gymnasts, doing tricks on the backs of our beloved horses. And falling meant something very different then, than now.  Perhaps because we knew someone was always there to pick us back up.

So what does that have to do with soup?

When I think of soup, even now, time stands still. I remember the smell of Mom's homemade soup simmering on the stove through really good times, some hard times... and even a few heartbreaks.

Nights that were so cold, we thought we just might die (yea, I lived in Santa Barbara and had no idea of the true meaning of cold). The time when we wanted a simple, but good and hearty meal after that long drive home from Horse Camp. And those days that I was picked up from school with sniffles, or a sore throat, or even when I wiped out on the playground bars and needed 3 stitches on the right side of my forehead. Mom would heat up some Campbell's Chicken Noodle Soup (with ice cubes to then cool it down) while I would watch the Munsters. Funny, as for the next few weeks Herman Munster and I could have passed for twins.

So, soup? Simple. It's a place of comfort and safety that magically wipes out any fear of falling (or failing). 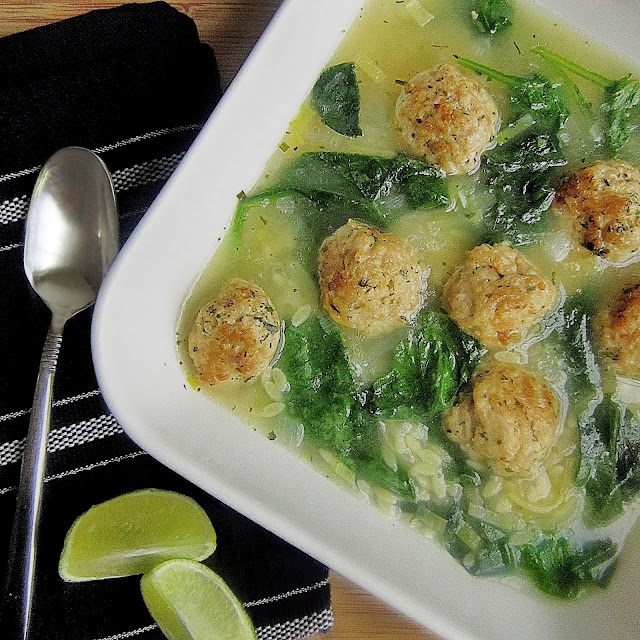 1 lb. ground chicken
2 large boxes chicken broth (add as much or as little as you'd like- but I like making a lot for leftovers)
1 sweet yellow onion, chopped
2 leeks, washed well and sliced into thin half-moons (just the white part)
1/2 lb. orzo
1/2 package fresh spinach
Juice of a lime (this is key as it adds such a nice bright flavor.  I add to almost all my soups.)
1 tablespoon seasonings of choice (I use Parisien Bonnes Herbes from Penzeys)
Olive Oil
Salt and Pepper
Romano Cheese, grated (optional)

Open chicken packet and sprinkle with salt and pepper.  Then roll into 1-1/2" balls.  Brown in a skillet with oil, and sprinkle on seasonings if desired.  In the meantime, in a soup pot add the leeks and onions to oil, salt and pepper and saute until soft.  Add in the chicken broth and seasonings of choice and bring to a boil. Then add in the orzo and cook according to package directions- about 8 minutes.  Once soft, add in the spinach, juice of the lime and the meatballs to warm and wilt the spinach for just a few minutes.  Ladle it up in bowls and top with Romano cheese.