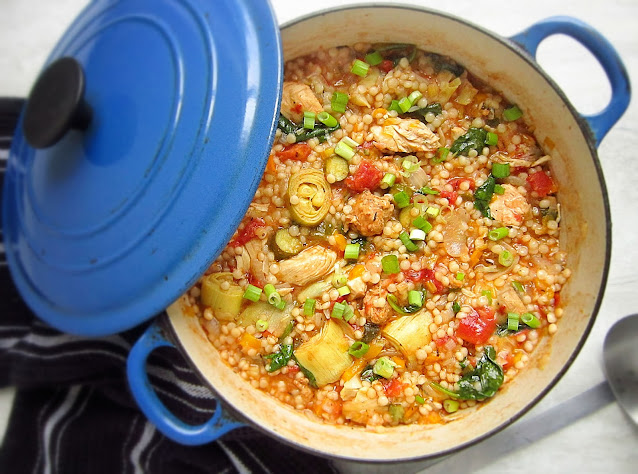 The garage door creaked, as it slowly made it's way up. Hat on. Hair in a ponytail. Top down.

It had become a weekly thing. And each week, as the engine roared to a start, after being tucked away neatly in the garage, there were sighs of relief. Kind of like after those long holidays, where you hope your car starts after sitting in the airport parking lot... just one day too long.

We'd been living on the edge.

I didn't think I'd ever understood why a few months back, my man would even consider buying this 1999 Camaro. Although, as a child of the '70s, it didn't sound all that old, until I did the math. Fourteen years old, to be exact. And a mileage that with previous cars, would have also led us to the dealership, but for very different reasons.

A play car. And a convertible- well, that's fun, right? But it's loud. And it reminds me of a high school kid, revving his engine, with much to prove. Racing with the wind- not to mention anything or anyone on the road up for a challenge.  A bronze beast that's completely opposite of my beloved car... which is now known as my "old lady car."

But today, as we took the beast out for a spin, I glanced over and saw the look on his face, and I finally got it.

It wasn't just about his teenage dream car. It was about something more. It was about those few moments each week where he could sit back and relax, let his hair fly in the wind, breathe in the fresh air, and feel like... well, a kid again.

So, this week's dinner is also about low and slow. Food that can't be rushed. Food that allows you to kick up your feet and breathe in the incredible smells, as the dish's flavors meld together. And food that brings you back to your youth... back to a simpler time.

And for my dish, I decided to create a twist on Jambalaya, with a California spin.

I changed out couscous for the rice, which added a soft, hearty texture (make sure and use the Israeli type... it's much bigger and has a fluffy bite). And the addition of spinach and artichokes were not only pretty and added extra nutrients, but also offered some cooling... which was helpful for a spice wimp like me! Don't like okra? These baby zucchinis were tasty and gave a similar visual effect.

And for the Holy Trinity, the yellow pepper offered a nice sweetness, instead of the traditional green or red. And since I'm allergic to celery, I switched it out for leeks, which has become my new favorite in just about every dish. And when combined with the pepper and onion, it offered incredible dimensions of flavor.

Finally, I decided on Italian sausage and chicken for the proteins, but you can use the traditional andouille sausage, plus seafood, like shrimp, which would be added at the end. Just make sure and opt for chicken tenders (and keep them whole), instead of the breasts. The moistness and flavor blended perfectly with the overall heat and textures in the dish, and kept us coming back for more... and more... and more. 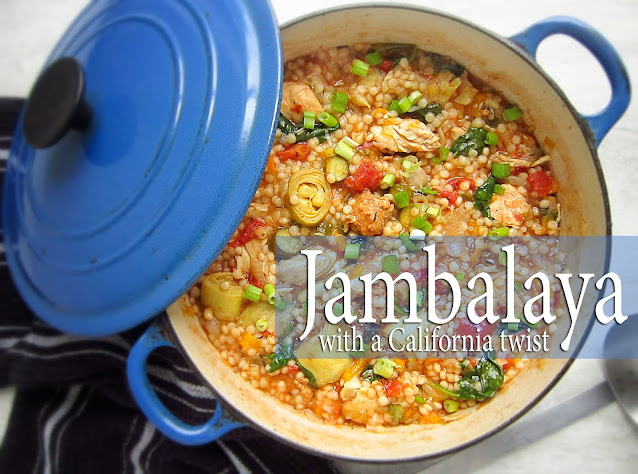 Jambalaya with a California Twist

In a large dutch oven, add in olive oil and heat up. Then add in onions, leeks and yellow peppers. Cook over medium-high heat until they are soft and caramelized. Add in dried seasonings, salt, pepper, and garlic.  Saute for a few minutes to soften the garlic. Then add in the zucchini, artichoke hearts, tomatoes and sausage. Gently stir fry the sausage for about 4 minutes or until lightly browned.

Lay whole chicken tenders on top of all and sprinkle with Creole seasoning (I used about 1/2 tsp.) Place 2 bay leaves on top, and then add enough chicken broth in to cover the chicken.

Bring to a boil, and then turn down the heat. Cover and let cook for one hour.

After an hour, add in 8 ounces more chicken broth and the package of couscous. Replace cover and let cook for 30 more minutes on lowest heat setting.

Once couscous is cooked, remove bay leaves, and add in spinach. Stir for a minute or so to wilt, check seasonings, and add salt or pepper if needed. Top with green onion garnish, and serve.